Some photos from a few hikes in Bamako and Siby 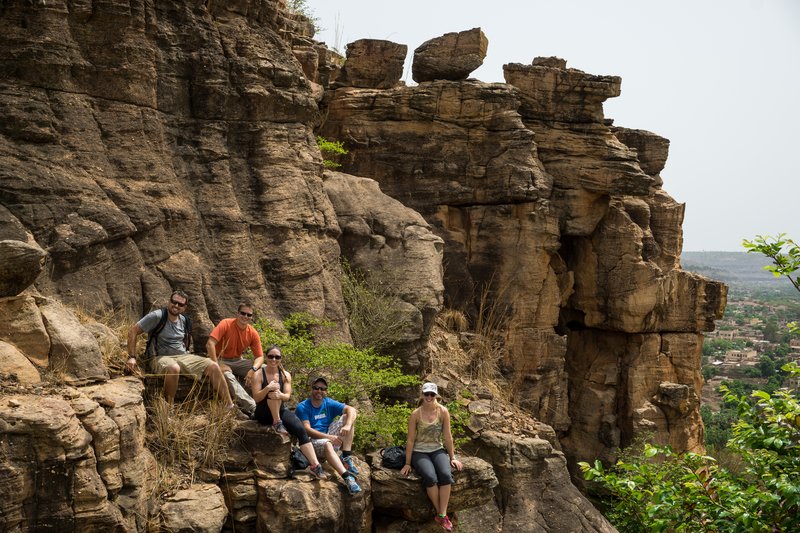 The terrain in the Bamako area is very flat, with lots of large outcroppings of rocks (almost like the butte's in the western US but on a smaller scale). All of the below pictures are from three different hikes, and it covers the end of the dry season and into the rainy season. It's easy to spot the difference, as quickly brown dusty areas become filled with lush green vegetation. 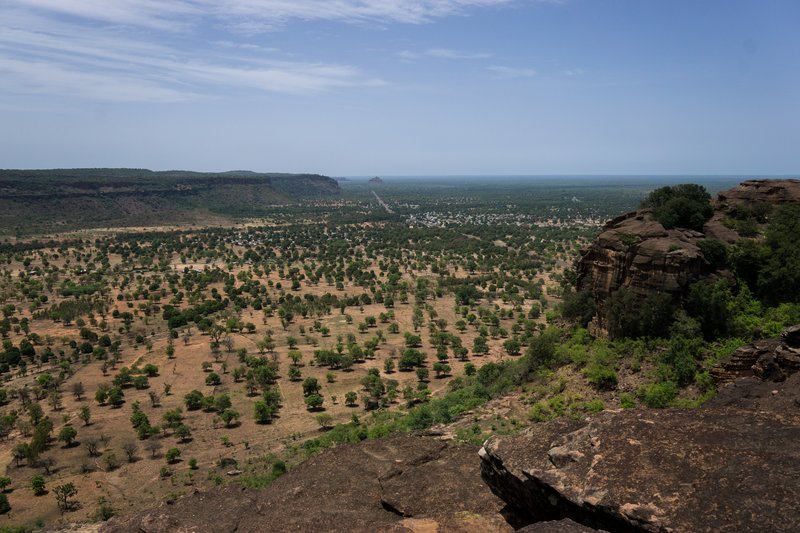 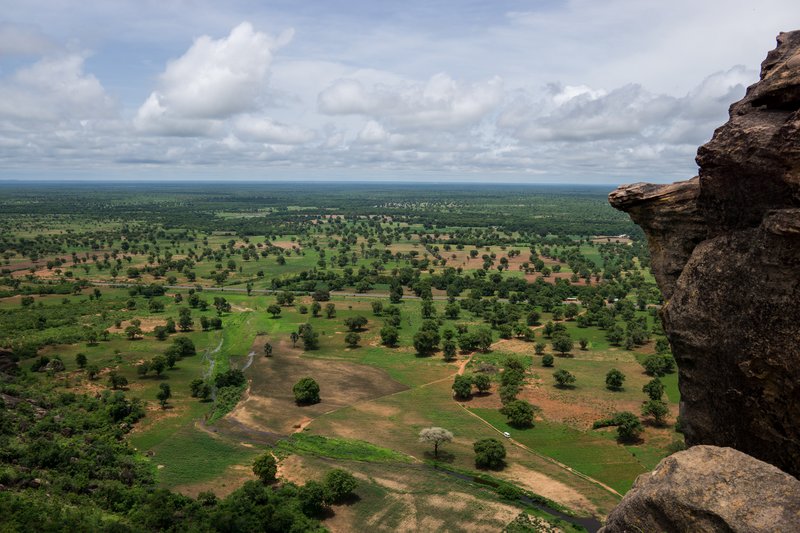 There are a few different neat things to see in the Siby area (about a 45min drive from the capital city of Bamako). One is a naturally formed arch out of the rock. We were able to hike underneath, and on top of the arch, and had quite the view! 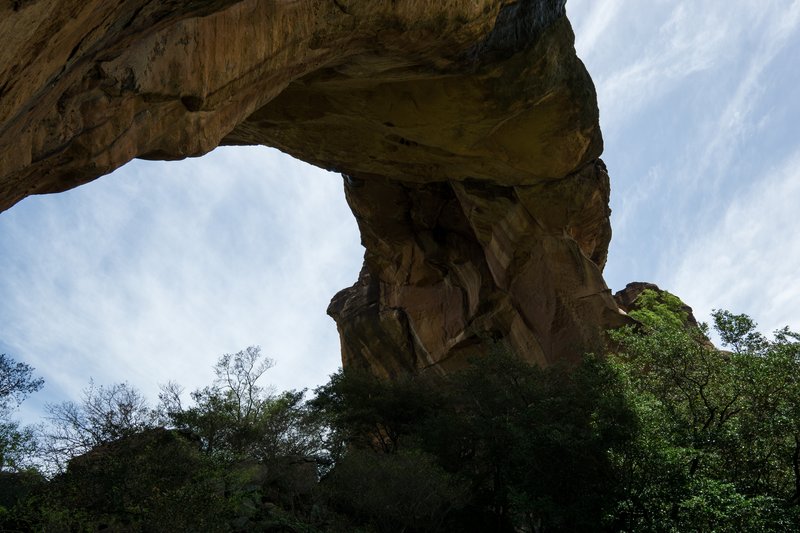 Corey, Aleasha and Julia under the arch in the shade, they are sitting on a narrow outcropping, with a good drop below! 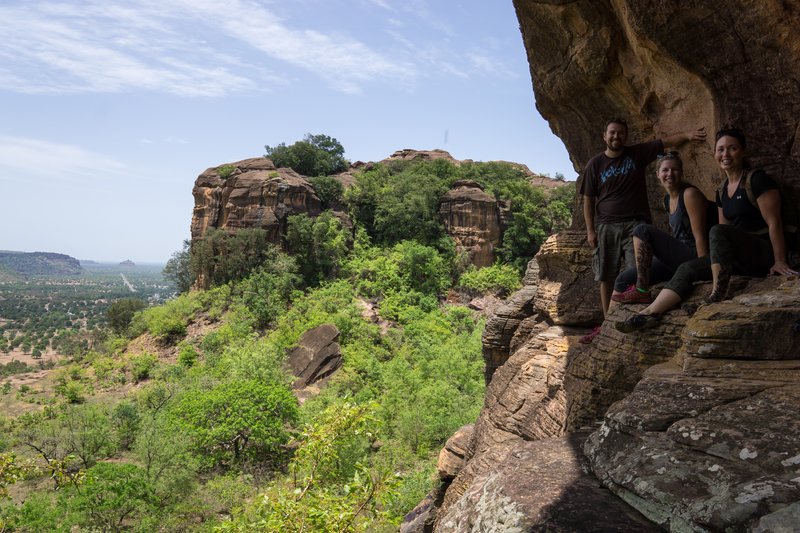 After being under the arch, we came to the top, where I took a break and enjoyed the view! 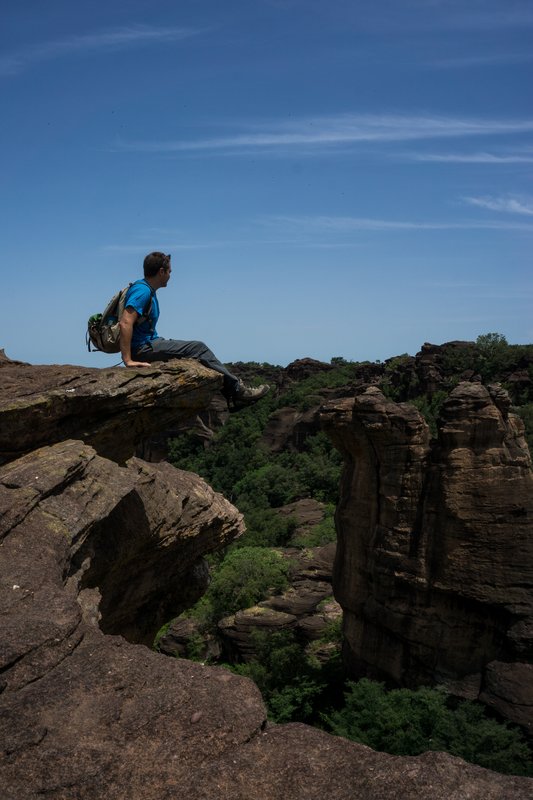 While we were resting on top of the arch, I decided to climb back down, to go up a different outcropping for a photo of the group. You will notice some local kids with us, we found them along the hike and they decided to become our guides! 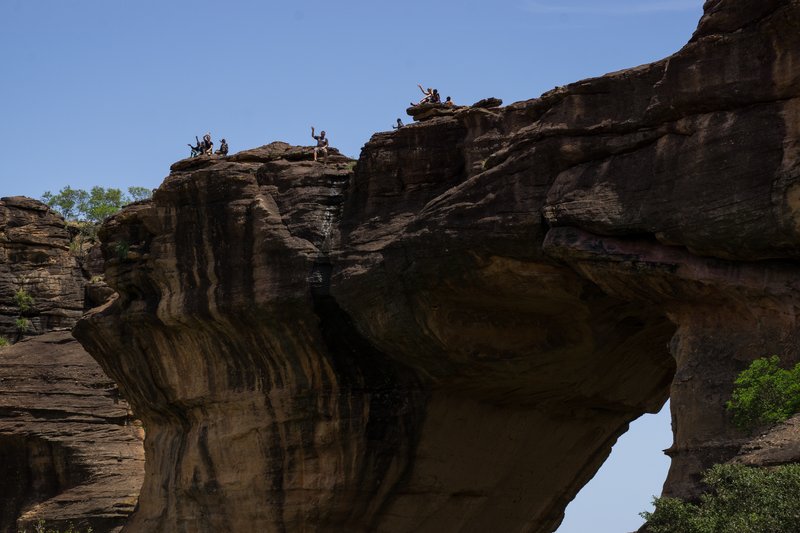 After coming down the arch, we hiked some more that day before calling it quits in the late afternoon. Here is the arch from a distance: 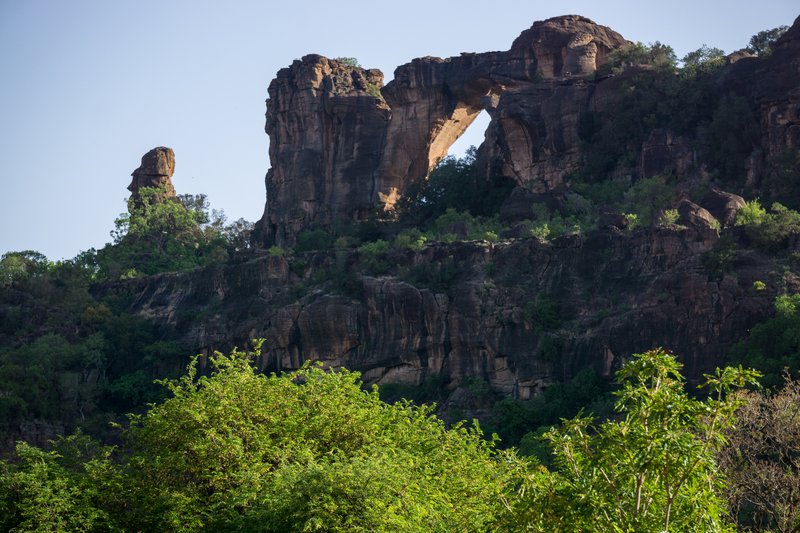 Just behind the arch is another outcropping that to me looked like a giant waving his fist: 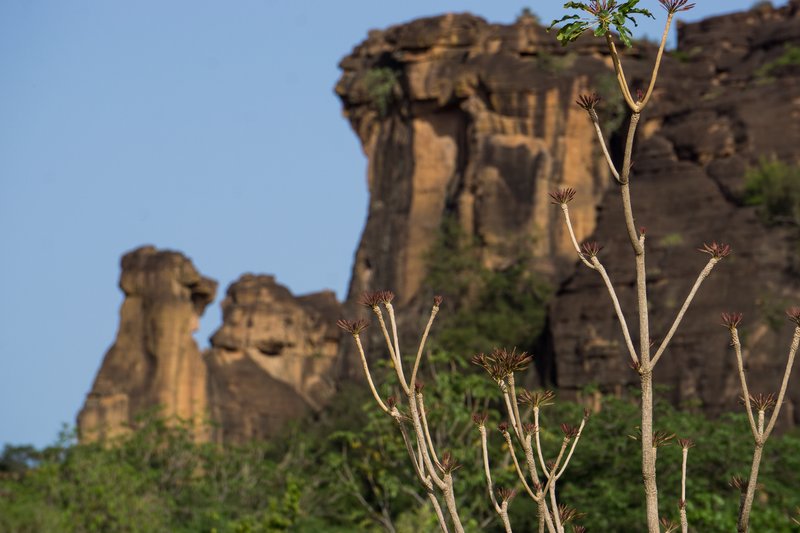 One of the other sites is a decent sized waterfall. 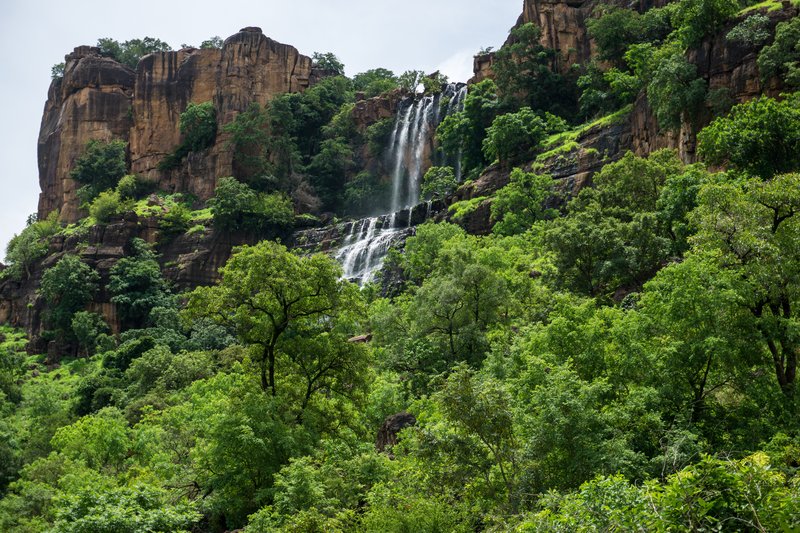 Our first hike in this area was at the start of the rainy season, and the water wasn't really flowing at that point. We decided we wanted to get to the top, our first attempt was to go to the left of the waterfall (left when looking at the waterfall) but we were not successful. That didn't matter much, as the three of us (Corey and Jeremy were with me) had a great time climbing over rocks and in through little wooded/jungle like areas. We all felt like we were in our own Indiana Jones film, just we didn't find treasure, and we took many breaks as we were out of shape!

Corey and Jeremy with no where to climb! 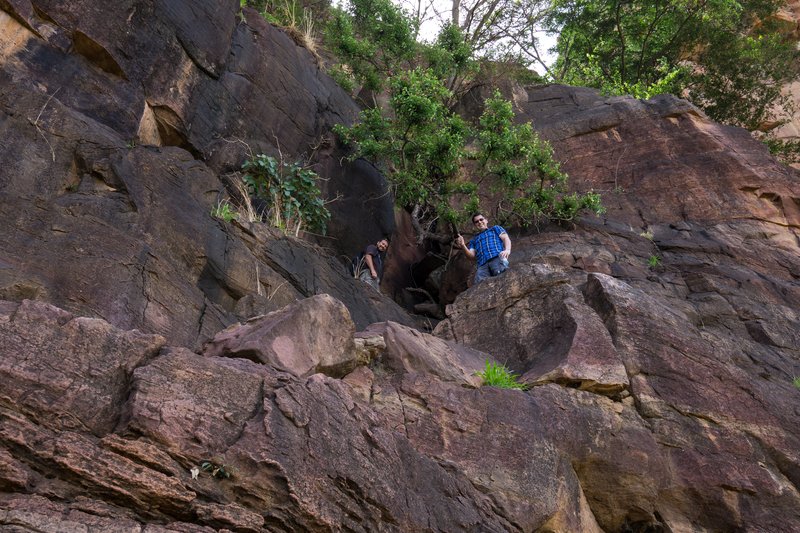 Here is a view from the base of the waterfall on our return. You can notice there isn't much water flowing at this time of the season: 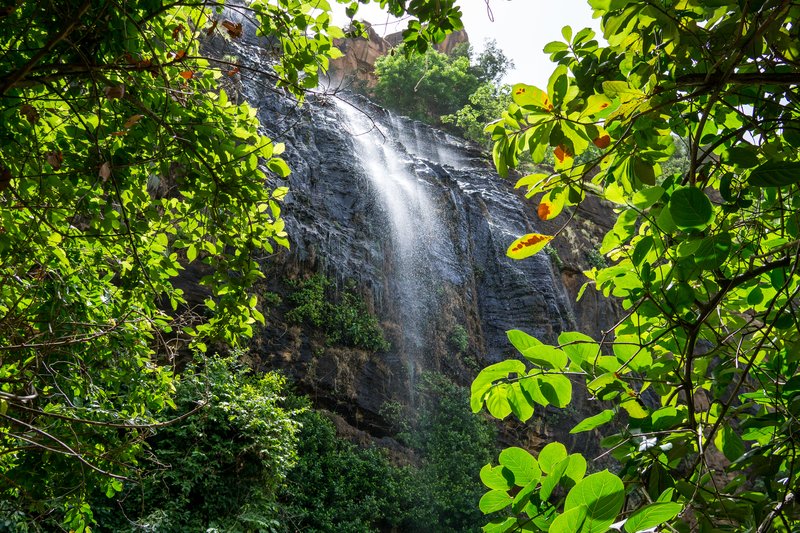 A few weeks later we made a renewed effort to reach the top of the waterfall. This time Corey and I were joined by Aleasha and Sebastian. We were now fully into the rainy season, the water was flowing, and the grass had grown! We now had to contend with waist high grass along the first half of the climb. 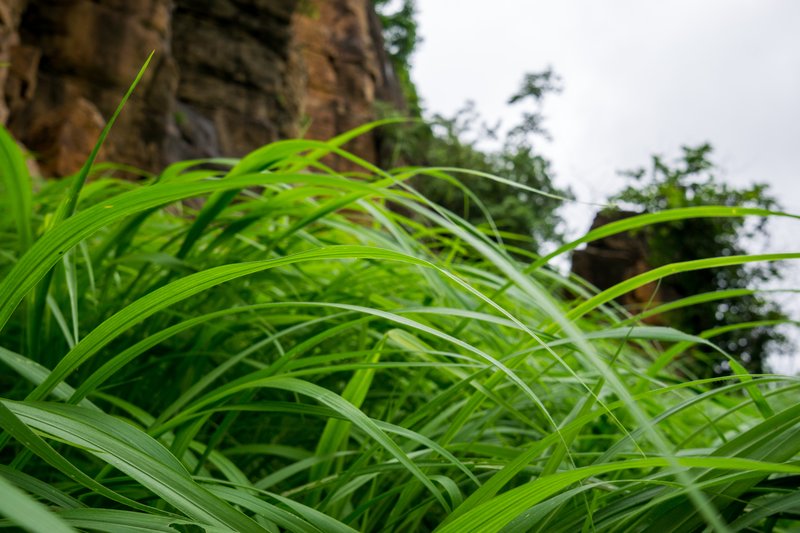 The climb took a couple of hours, a lot of doubling back or going in the wrong direction to find an access point to continue, but we were successful! The view from the top was well worth the work. Without much shade at the top though we did not linger as long as I would have liked, mid day here is quite hot in the sun!

I worked my way past the waterfall to get this angle for the photos. 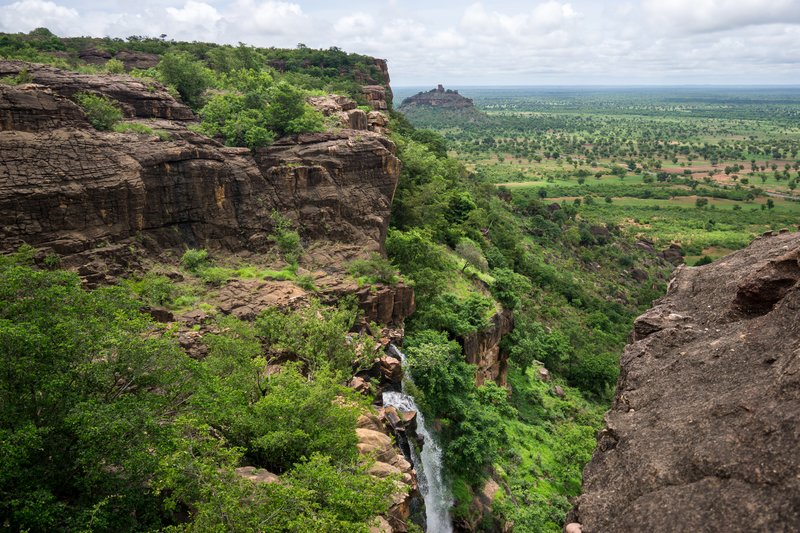 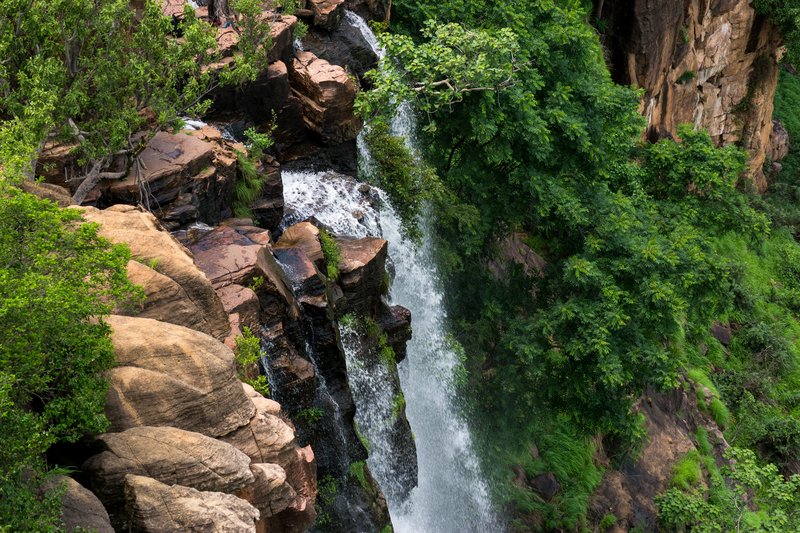 The trek down was not easy either, now we were all tired from the sun, and that long grass was great at hiding rocks and other stuff that could help to trip us up. This whole area is great for hiking around, and has a nice untouched feel to it. We would see some locals from time to time, but for the most part we were on our own to explore the area. Here we are stopping for a water break close to the bottom, definitely needed lots of these by the end! 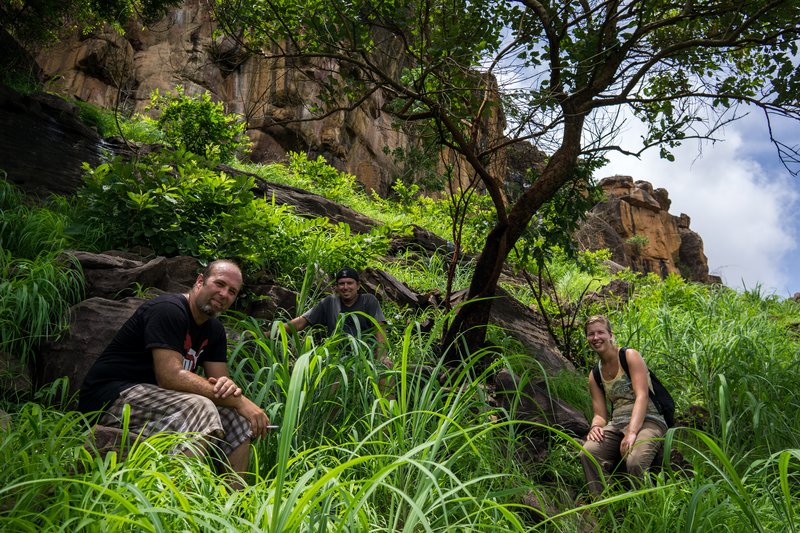