My Life in the New Year

The Ups and Downs (bad pun) to my latest rotation

It’s been awhile since I’ve added new content on here. While this is partly due to my excessive laziness, that’s not the only reason. Since my three weeks in Morocco (photos have now been finished so expect some writings on that soon) and Christmas holidays I have been back to work, and keeping busy. My average work rotation will see me reach a base and spend approximately 8 weeks there before returning home. This rotation is far from normal. Thus far I have traveled through or stayed in 11 countries, operated three different aircraft (with two more at least to go) and have earned more air miles than I usually do in half a year. As you can see from the map below, a child drawing loops across Europe/Africa could pretty accurately draw my recent travels. During the past six weeks my schedule constantly changed, often times on short notice (the midnight phone call to advise me I was needed on a 4am flight to Iceland from Africa probably takes the cake on that one) turning my rotation into quite the adventure. As with any real adventure, there have been some good days, less than ideal days, and some funny situations. For my return to these writings I thought I would regale all with some highlights from the past month, and give some details to my upcoming deployment to Greenland.

I left Canada on Jan 8th or so, with the expectations of spending approximately three weeks in Juba and then eight weeks in Bamako, there was an indication I may leave Bamako early for a short term contract in Greenland, but nothing was confirmed. Even before setting out from Canada this was supposed to be a bit more hectic than normal, but not excessive.

First there was Juba. I ferried an aircraft into Juba from Entebbe to start a new contract, while exciting to get some new contracts, starting them is not always fun. For starters we had 5,000lbs of company equipment to offload in Juba. After the manual labor is completed the inspections start. As the Captain I get to spend hours showing inspectors manuals and certificates, as well I get to explain why our paperwork is much different than many other contractors (Canadian Regulations are very different from many African / former Soviet Bloc countries) which is a slow and at times painful process. Once through all of this we moved into our new hotel, the Oasis Hotel. While its name may convey many positive thoughts of luxury, the reality unfortunately was much lower. Even by Juba standards, the food was so sub-par we were forced to eat out / order in most days. Also it took me three weeks before I had a hot shower…the place had some kinks to be ironed out. The time went by fast though as we were flying flat out five days a week keeping busy. 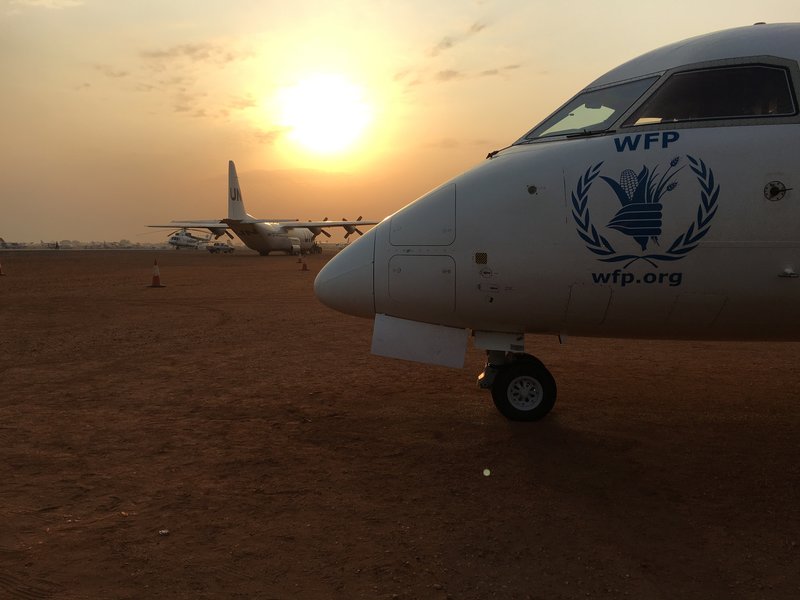 Morning shot from the ramp in Juba.

Before I knew it, I was back in Entebbe getting ready for a Kenya Airways flight to Bamako via Nairobi for essentially a three week vacation. Bamako is a unique base for us, and the flying is either non-stop, or non-existent, rarely anything in between. I was expecting to have three weeks by the pool relaxing with a book and drink in hand. The first real wrench in my schedule came here. Just before departing for Bamako I had an email from work, the aircraft I was heading out to crew was now needed in Juba the previous day. I ended up spending a full 48 hours in Bamako, helping our maintenance to load the 5,500lbs of equipment into the aircraft while closing down our accommodations for a three week crew absence. I don’t recall us really stopping in the two days, finally being able to relax as we departed for the ferry east, enroute to our first stop in Accra, Ghana. Normally for these ferry flights, we will have a local fixer meet us at every airport and take care of all our needs. Things happened a bit different for us on this trip, so I found myself in Civil Aviation Authority office to pay some landing fees before departing for Bangui. I showed up just as a Nigerian soap opera titled “Silent Cry” had begun, and it turns out the staff don’t process payments while Silent Cry is on the telly. Imagine my companies surprise when I explained away a 1 hour delay because I was required to watch an episode of Silent Cry before making payment! This was just the start of our day, due to a lack of catering, we operated the rest of the day on coffee, skittles and nibs (thank god Andrew packed a 50lb suitcase stuffed with such necessities!) encountering a few more headaches before finishing the day in Entebbe (delays in Bangui caused us to take-off 4min before the airport closed stranding us in the Central Africa Republic for an evening).

Before taking the aircraft into Juba, WFP decals needed to be installed onto the aircraft. As nothing else had gone according to plan, neither could this and we ended up with a spelling error on one side of the aircraft: 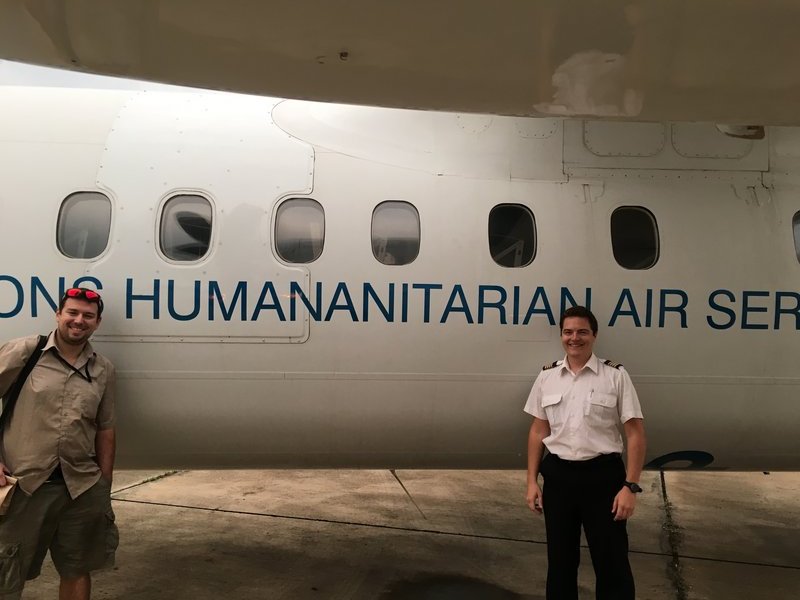 It takes a few tries to pronounce it correctly, but once you learn how to combine banana with humanitarian you’ve got it figured out! 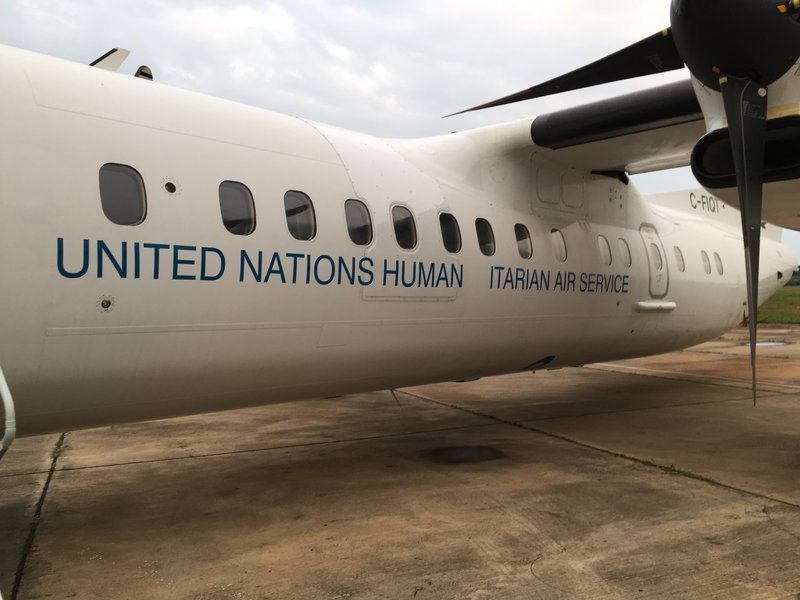 This is the after shot. You almost don't notice the space...

So now I’m back in Juba for another 3 week stint, complete with the standard offloading and inspections (slightly less painful round 2, but not by a long shot) and back to the not so aptly named Oasis Hotel. Now this time around I had hot water by day 2, so there had been some improvements in my absence. I say improvements, but that’s a bit optimistic, the fella who got me hot water uninstalled my cold water pipe in the process, this gave me a 45 second window to shower before the hot water heated to its full potential, and became too painful to use. This issue never was fully resolved before I left, so really in my two stints staying at the Oasis Hotel I don’t really have anything positive to say. Oh it was located on the Nile, so in the mornings the view was nice, and if they had coffee it would have been a pleasant place to watch the sun rise.

After another few weeks of Juba flying (similar schedule to the first aircraft I brought up) I found myself back in Entebbe two days early, with nothing to do but sit back and relax. The Greenland contract had been confirmed and I was to return home for some winter clothing and a day of training before taking an aircraft over to Sondrestrom for a few weeks.

My first day in Entebbe was beautiful, I never left my hotel room until supper, the tunes were rocking, I had the patio door open to my balcony, and I just sat there, working on Morocco photos from time to time, but mainly just sitting there… it was great! On my way to bed just before midnight I noticed an email from my boss needing me to call. This is where things started to go sideways, and it didn’t really stop going sideways until the past day or two.

Talking with my boss, I learned the Bamako replacement aircraft was needed there in a hurry, so I was needed in Iceland to pick up the replacement like a relay race and take it to Morocco where I would pass it on to a third crew. While on the phone my boss was informed the only flight they could get me on would leave in 4 hours, and take a full 24 to get to Iceland with two enroute stops. It’s not really the information you are hoping to receive on a midnight call, but I’ve never seen Iceland so I figured whatever. It may seem obvious to most, but Iceland is pretty cold in the winter, I wasn’t really considering that as I packed at 1am, because if I had, I’m sure my sweater and jacket would have made it into the carry-on bag, and not my checked luggage. Of course by now we all know with everything I’ve highlighted thus far, there is just no way can my bags arrive in Iceland…and they didn’t. So there I am at 1am in Iceland in a T-shirt with no bags, welcome to winter! Add to this, my plane didn’t arrive either, so nothing was going according to plan. 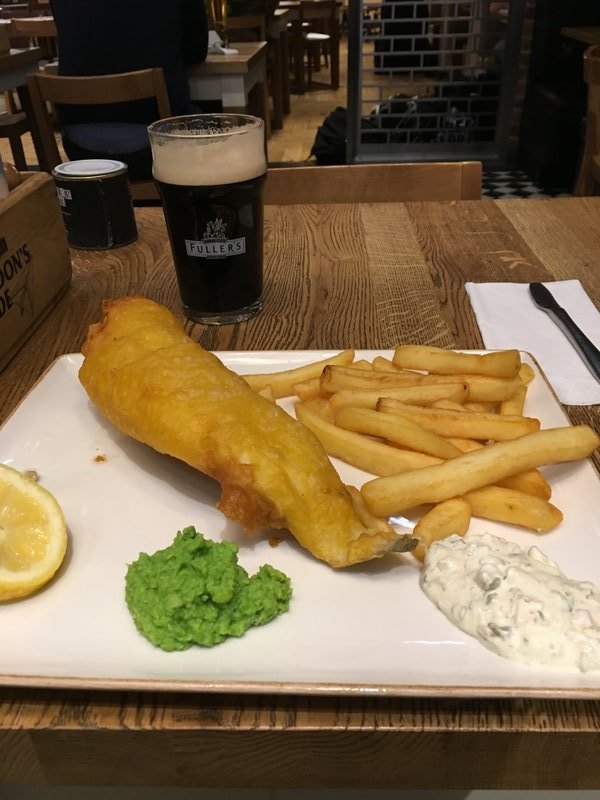 I did get some fish and chips with a few fresh pints between flights in Heathrow. About the only highlight to the day.

Iceland is an expensive place, I think my per diem was gone by lunch, and I still only had a T-shirt. I stopped into a sports apparel store and found some suitable jackets (similar to many I already own) for 150-200 USD. At that price I said screw it, went next door to a local place and bought an authentic Icelandic handmade wool sweater. While very warm, it may not have been the most stylish piece of clothing, as evidenced by every comment I’ve received since! I believe the best one was noting I must be every grandmothers ideal man for their granddaughter to take home (thanks Julia!). As for all the comments on my hair that I received at the same time, I’ve had the same haircut since I was 12 and decided to grow it out some, it’s still a work in progress 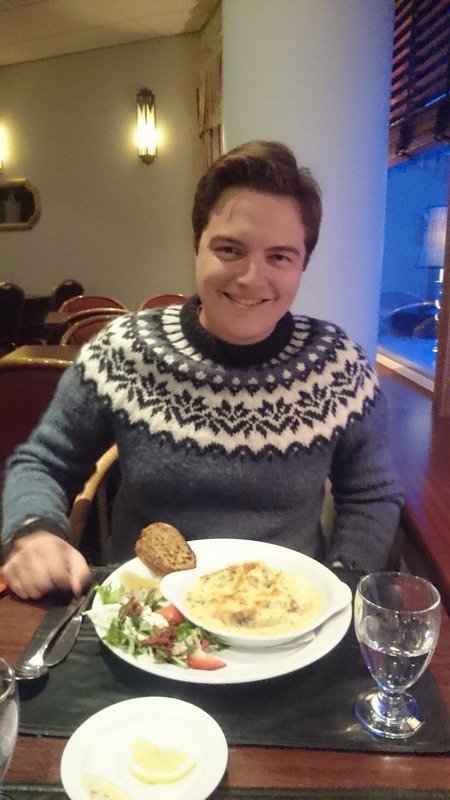 The plane I need to ferry shows up eventually, and all I need to do is get it to Morocco, fly home commercially and get a change of clothes. Close, but it ended up getting a bit more complicated still. Arriving in Morocco I learned I was to sit in the back of the aircraft for its flight to Mali. Arriving in Bamako I was able to offload my 3rd aircraft of the rotation (another 5,000+ lbs) and as a bonus I got to operate the following day with two runs to Timbuktu. I’m now 5? days in without a change of clothes and not at my finest, but my wool sweater is handling it all well! Well things improve from here on out, I get the runs finished and fly out that same evening on Air France. The next day I make it to Toronto an hour before dad, and had a chance to catch up in the terminal. Then it was oft to London, where as it was my lost bags were delivered a day before my arrival, so everything worked out well in the end!! 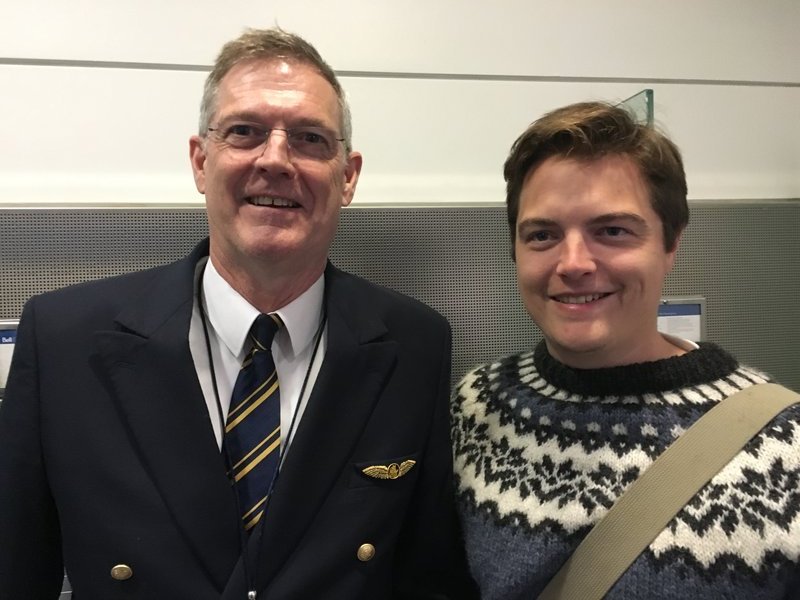 This gets us to mid last week. Since then I had a full day off (I spent it buying winter clothes because as it turns out, I didn’t have any) followed by some training in Toronto. I’m now in North Bay getting ready to ferry an aircraft to Greenland. I’m still waiting on some final details, but it sounds like I will be in Sondrestrom for two weeks, and not flying much. I have two great crews going with, and we have already done some research, so I’m hoping for an action packed two weeks that includes glacier hiking, dog sledding and some Northern Lights viewings!

Stay tuned and I will try and give some updates on the upcoming winter adventure!

Great write up Luke! What a whirlwind of a rotation. Look forward to seeing you in April?