From the Pastéis de Belém to the Cafe com Cheirinho, the local cuisine can not be overstated!

For me, the best of Portugal was served on a plate or in a glass. Here I will discuss some of the great meals, and where I had them, as well as the local alcohol which was great!

To start, especially in group settings at a restaurant, I found everything would come out as a communal serving. Rarely did I order a dish or plate for myself. Most meals came out on platters that the table would all take from. For those planning trips to Lisbon in the future, I’ll talk of some restaurants I visited that are well worth the stop. The included pictures are not mine, I’m not usually great at taking photos of my dining experiences

An old Monastary turned brewery turned full service brewery/restaurant, Cervejaria Trindade is a big tourist destination with decent food. While not as good as the other meals I had in Lisbon (which still means it was a good meal) the atmosphere was definitely worth the stop. I had a cod and potato dish that looked small on delivery, but filled me quite well. Their beer was good as well, I remember having a darker pint or two with supper and a lighter ½ pint as dessert at the bar (waiting on Nuno to finish in the bathroom).

Recommended to us for lunch by the GOCAR staff, it was a huge hit. The staff was friendly, and the food was amazing! I had a pork dish that was absolutely delicious, Nuno had some good looking seafood too! Located in the heart of downtown near the main square on the water, it is conveniently located to pop in for lunch or supper if in the area.

Nuno’s cousin, who lives in Lisbon, took us here for supper. Tasca da Esquina is known for providing a modern twist to traditional meals. We went for the five course special (you could choose from 3-7 I believe), across the five courses we sampled most of the standard ‘Portuguese staples’ each dish being plated beautifully! Compared to most places I ate in Portugal, I wouldn’t come here as a budget traveler, but for me it was well worth the price!

The egg pastries found here are the primary reason I felt we needed a separate conversation on food. Simply put, it is, by far, the best pastry or custard I have ever ate! The recipe is considered Portugal's best kept secret, and I have read they will not write it down, it is passed verbally from master chef to master chef like the passing of a torch. Click here to read a great article on the tarts history and the secret surrounding the recipe. It is well worth the read to understand the passion surrounding these little delicacies. Also you can note they serve upwards of 50,000 tarts on a good Sunday!!! 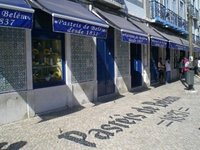 A little rustic spot on the Praia do Pedrogão beach, Quebra Mar or just O Manel (the owners name) as the locals tend to call it, was a great location for supper on the edge of the ocean. The front door is beside the large outdoor grills, which were covered in freshly caught fish as we entered. Our group of ten were split down the middle for grouper and bass, so the chef eyed out roughly five servings worth of fillets and grilled them up. We received one large fillet of grouper and one of bass to divvy up around the table, it was served with side platters of potatoes and vegetables. 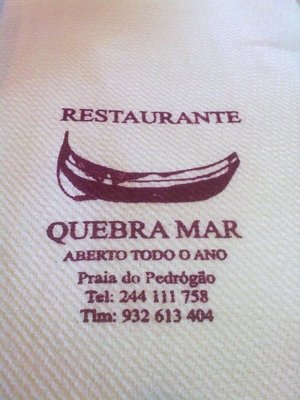 The next evening I was in Nazare for supper sampling on oysters, shrimp, and crab. This place was half restaurant, half seafood store. It was a much brighter atmosphere, the walls in bright blues and adorned with fishing nets and other accessories. The table beside us bought the mixed seafood bowl (says it feeds 3-4), it was served not in a bowl, but an industrial sized pot! I would guess it could feed six easy, almost felt bad for the family of three who stared at it in shock for the first thirty seconds!

The final evening we had supper with Nuno’s parents and grandmother at a local restaurant in Leiria. What I remember most of this meal was being beside Nuno’s grandmother; every time a plate was near its end she would decide to place the remnants on my plate as I was the visitor. We must have had 8-10 plates on the table for us to all share from, I was stuffed by the end!

Alcohol wise, I should probably start with the Port. Deriving its name from the town of Porto, the fortified wine was very commonplace and a great way to finish a meal, or get the stomach ready for supper! For hot days and seafood, the Vinho Verde was a great choice, a light white wine (though I guess technically its a green wine as per its name) that wasn't too sweet. 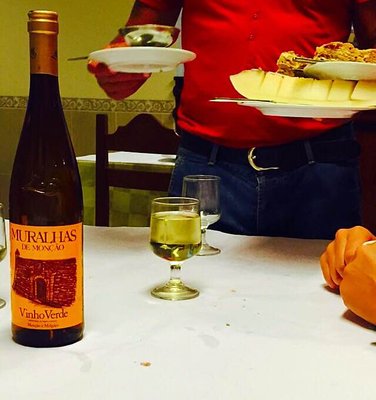 One tradition I loved (I know you will find similar ones in Spain, France and Italy among other countries) was the Cafe com Cheirinho (Cafe with a 'wiff' of moonshine). A post meal espresso served with local moonshine, I found it more prevalent here than some of the other countries I just mentioned. The idea is to pour some moonshine in with your espresso to give it that little bit of extra kick. Once the espresso is finished, you pour some more moonshine into the cup to wash it out (swirl the moonshine to grab all of the residual espresso on the sides of the cup). Rather than serving a proper one or two ounce shot, most places would just bring a small carafe of moonshine and you just take what you want. 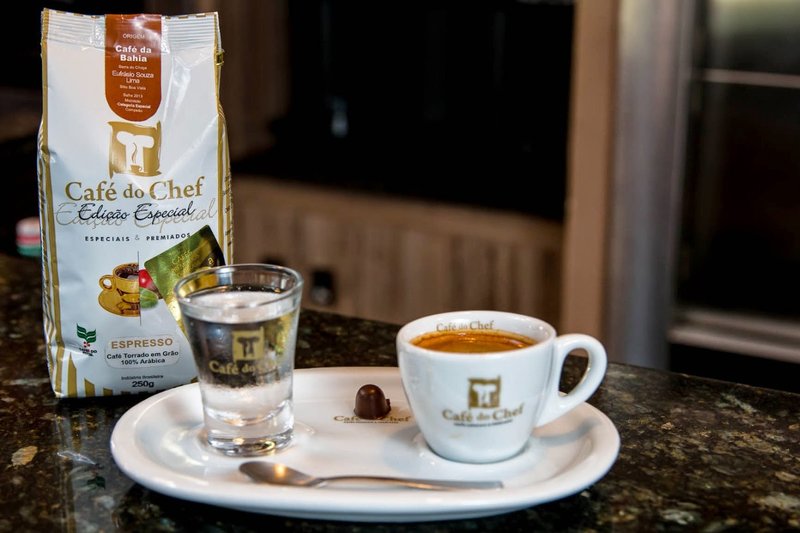 The last alcoholic beverage I need to mention came from Nuno's grandmother. After our final supper, I ended up back in her apartment sampling her special homemade drink. As I understand it, she starts with local moonshine, red wine, sour cherries and sugar. Place them all together and let the fermentation happen. After six weeks I think it was, there is now a sweet and strong drink, with some sweet cherries to snack on. I had to be careful standing up afterwards as two drinks and ten cherries really hit me! This homemade drink was the perfect way to end my trip in Portugal!